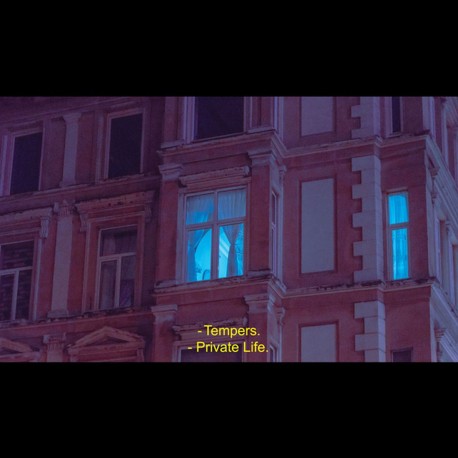 New York based duo Tempers, comprised of Jasmine Golestaneh and Eddie Cooper, have been diligently carving out their own unique niche within dark indie, electronica and synth-pop circles since their formation. After a series of digital singles in 2013, Tempers began solidifying their singular identity of rigorous electronic production blended with instinctual, unleashed vocals. Following well received tours in Europe and the United States, Tempers saw the release of their debut album entitled Services, released in Germany via the highly regarded cult imprint Aufnahme + Wiedergabe and quickly became a staple in the synth-pop/post punk scenes in both the States and in Europe. Since the release of Services, Tempers have regularly appeared at a number of international festivals and venues, including Test Pressing Festival and Berghain to name a few, and ambitiously created a concept album entitled Junkspace in 2018, in collaboration with famed architect Rem Koolhaas, about the deconstructed banality and overlooked grace of 20th century shopping mall culture. Tempers third full-length album, Private Life, successfully progresses their cinematic aesthetic into a moodier and more introspective landscape. Private Life opens with

Side B:
Guidance
Push/Pull
More Than You Realized
Sleep
Exit