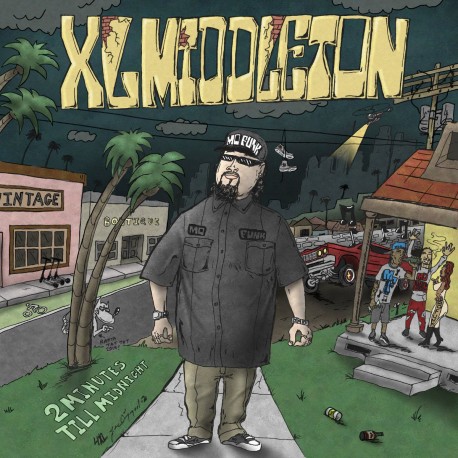 After making serious noise in the modern funk world, XL Middleton makes a return to the g-funk/hip hop sound that marked his earlier work with "2 Minutes Till Midnight." It's a funked out, synth-heavy excursion with an equal amount of appeal for modern funksters or the underground legions of g-funk fans that put XL on the map originally. Those familiar with his most recent albums, "Tap Water" and "Things Are Happening," will recognize the signature synth leads and intricate analog bass lines. Those unfamiliar with Middleton as an MC will find that he challenges standards in the worlds of both underground and mainstream rap, eschewing the backpack as much as the Bentley, falling into a space that few can. XL's lyricism is cerebral and well-read, yet it's clear that he comes from a part of the world that relishes khakis, Chuck Taylors & Zapp records. "2 Minutes Till Midnight" stands firmly rooted in the funk tradition of Los Angeles, showing reverence for the music that inspired it by bringing g-funk legends Kokane & Domino ("Getto Jam") into the fold as guest artists and by featuring album artwork from Joe aCool, who designed the iconic "Doggystyle" album cover for Snoop Dogg. XL's contemporaries, such as labelmates Zackey Force Funk, Moniquea, & I, Ced, also join in and help to remind us that the album is not just a self-indulgent tribute to a bygone era of music. As modern funk grew largely out of hip hop, XL takes that growth backward, and moves the music forward as a result.

Side A:
PTL
Where We About To Take It (Salvation) 3:00
I Don't Wanna Wait
What She Sounds Like
Love When It Comes Down To It

Side B:
Gentched Up
I Can't Get Away
Think U Slick
Trippin
Wintertime In Cali