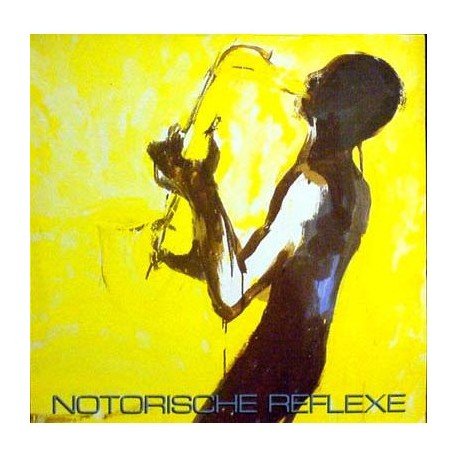 I honestly can't remember the first time I saw Notorische Reflexe perform, but I imagine it was probably at some mad avant-garde experimental event in SO36 or Tempodrom, or somewhere, because those days have become a hazy, crazy mixture of drunken, drug fuelled fragments of memories that have become barricaded in the back of my mind. One thing I do remember, is that their performances were always packed with wild and experimental artistic creativity. They were always extremely entertaining to watch, mixing self-made movies and music at a time when it was not the norm, especially in our little new wave scene, where money for marijuana was more important than spending it on food. This was at a time when Super8 film superseded VHS and the idea of a multimedia performance was in its infancy. Yet, the Notorische Reflexe were not just a band in the traditional sense, they were a collective of artists, each with a unique talent of their own, which they pooled together to create an experimental experience with every performance. You didn't go to a Notorische Reflexe gig to listen to a collection of their greatest hits, you went to a Notorische Reflexe gig to be enlightened and always, challenged. The 80s were a time of creative liberation. You could literally get away with anything. Audiences were generally open minded and tolerant to whatever it was you were presenting in front of them. You didn't have to be a proven perfectionist on your instrument to be able to make music of this unconventional style, you could just grab something and turn it into a musical weapon to unleash upon an unsuspecting, anticipating audience. It was as if they almost expected you to be weird and the weirder you were, the better and without doubt, Notorische Reflexe certainly fitted that bill. I loved watching them live. They were fun and funny. I sometimes got the impression they were trying to force a square peg into a round hole, like mixing disco with dirge, but that was the whole point of their unconventional presentation. They caused you to consider and query. Each performance was a one-off event never to be repeated. The movies mashed with the music, always in a bizarre setting, with piles of electronic junk as their stage scenery, which became their signature. Ok, the Notorische Reflexe might not be as well-known as Einst rzende Neubauten, Die T dliche Doris or Malaria!, but they were as equally important in creating what has meanwhile become known as the Berliner Geniale Dillitanten scene, because it was all the other bands like Notorische Reflexe (or my own band Die Unbekannten), who participated in this experiment, and who were an essential part of the pyramid of bands that supported the main feature and helped to create the Berliner Krankheit.