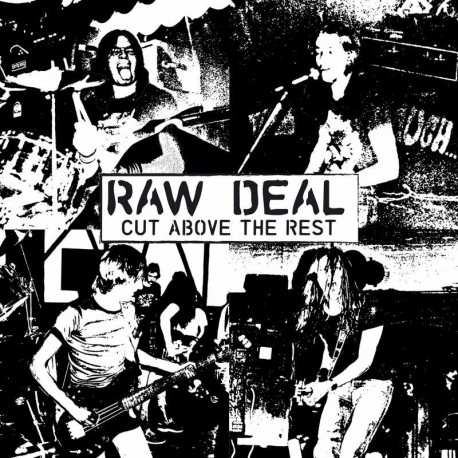 In late 1978 Ade Jones joined Raw Deal and contributed the bass lines to the first documented material from which the song "Cut Above The Rest" was lifted to appear on the much sought after "Kent Rocks" compilation LP, released in 1981 by the White Witch record label that originated from a local record shop. After the recordings and only but a few gigs, Ade was out of the band, and Brian switched from rhythm guitar to bass. In 1981 Raw Deal recorded two more originals; "Out Of My Head" and "In The Mood" that were released as a 7" single by White Witch records in response to enquiries about the band after their appearance on "Kent Rocks". With a solid live reputation in place but a music scene that was 'saturated', and no proper funds or promotion to lift the band to the next level, Raw Deal was at the short end of the stick which eventually led to the demise of the band in 1982. High Roller Records has done the band justice and gathered a selection of hidden gems, rehearsal tracks and previously released material; all remastered, restored and put together in what is one 'prime cut' of NWOBHM; enjoy!

Side A:
Make Or Break
Cut Above The Rest
Shadow Play
Out Of My Head
In The Mood

Side B:
Cut Above The Rest (Alternative Version)
Deviation
Out Of Control
Out In The Cold
Baby, I'm In The Mood