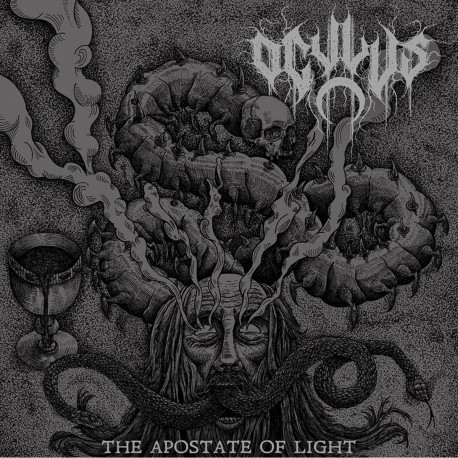 Oculus - The Apostate Of Light

With members spread between the USA and Europe, the pan-international OCULUS was spawned from the mind of Nero and then perfected by the minds of both Kozeljnik and Bornyhake. Both esteemed musicians prior have played in The Stone, Borgne, Pure, Manii, Deathrow, Enoid, and Ophidian Coil. Bornyhake contributed drums, bass, and keyboard samples while Kozeljnik contributed lyrics and vocals. The band was meant to illustrate their idea of what black metal was to them and the darkness within, as well as anti-Christian themes. And indeed they do on the highly antic ipated debut album The Apostate of Light. Heaving and hulking and yet emitting a wealth of nuance and especially atmosphere for something so spiraling and gnarly, OCULUS create a dissonant and chaotic experience that nevertheless manages a palpably linear flow. Orthodox black metal in the most classic sense, The Apostate of Light verily illuminates every crypt-dark passage with the blinding light of Lucifer. That the album was written in 2014 and yet still sounds timeless in any era is all the more remarkable. Behold The Apostate of Light with OCULUS!