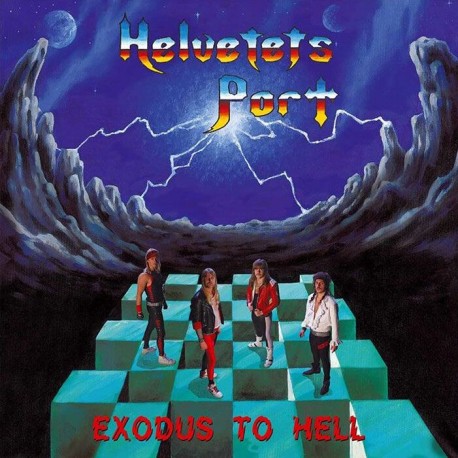 If you will, it was Gothenburg's own Helvetets Port who kickstarted the renaissance of traditional heavy metal in Sweden (and elsewhere). Formed in the early 2000s, their debut album Exodus To Hell was originally released on High Roller Records in 2009. The re-issue of Exodus To Hell comes with the Man With The Chains EP as well as the band's first ever 7" single Metal Strike as bonus material. Singer Tomas (Witchfinder) explains: "The first Helvetets Port song ever written was 'Heavy Metal Night', in 2000. Then the two other songs from the single were written in 2003, as well as some that would later end up on the album. We started recording Metal Strike in 2005 when we had just become a threepiece band." There is also a cover version of the song "Highway Rider" by NWOBHM band Wolf to be found on the re-issue of Exodus To Hell , coming from a NWOBHM tribute compilation. "That's right," confirms the Witchfinder. "It was originally featured on the Granbretan Invasion sampler. We are big NWOBHM fans and that's how I started my journey into the more obscure corners of 1980s heavy metal. Choosing a Wolf/Black Axe song was partly because we wanted to do a cover by a band that's not active at the moment, in the hopes of maybe lighting some form of spark. And of course, partly because it's from one of the best full-length albums ever made." When Exodus To Hell was originally released in 2009, it was not embraced by everybody, as Tomas explains: "It was kind of a watershed, a love/hate thing. And more of a people's record than a reviewers' record. Some people have always thought of us as a gimmick band, simply because they have no suitable frames of reference, or none at all, when it comes to old, serious heavy metal. The album's sound still feels good, however, and the song material is rock solid."

Side A:
The Shogun
Killers In The Sand
Dying Victim Of The City
Helvetets Port
Diamond Claw

Side B:
Fly By Night
Killed By A Reaper
HuvudlÃƒÂ¶s Gestalt
DjÃƒÂ¤vulens Triangel
Exodus To Hell

Side D:
Man With The Chains
Crusaders Must Ride
Lightning Rod Avenger