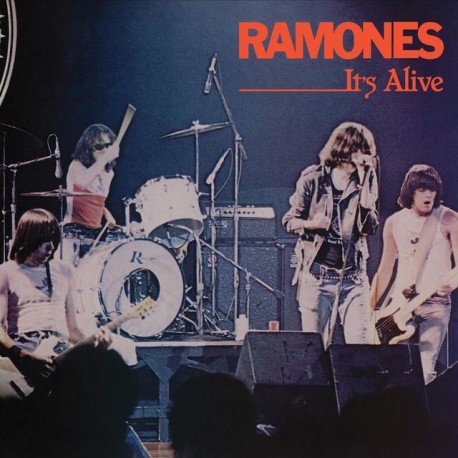 The Ramones' first live album celebrates its 40th anniversary this year with a new version that's been updated with remastered sound and expanded with with three unreleased concerts from the same tour. Originally recorded in London on New Year's Eve 1977 and eventually released as a double album in 1979, It's Alive delivered a blistering barrage of live takes on classic tracks from the band's first three albums.

Taking its name from a 1974 horror film, It's Alive was the last album to feature all four original band members: Dee Dee Ramone, Joey Ramone, Johnny Ramone and Tommy Ramone. All four concerts included in the new Deluxe Edition capture the band in peak form as they storm through dozens of songs from the group's influential catalog.

Among the numerous highlights are electrifying live versions of "Blitzkrieg Bop," "Now I Wanna Sniff Some Glue" and "I Don't Wanna Walk Around With You" from Ramones (1976), "Gimme Gimme Shock Treatment," "California Sun" and "Pinhead" from Leave Home (1977) and "Cretin Hop," "Sheena Is A Punk Rocker" and "Rockaway Beach" from Rocket to Russia (1977).

Side A:
Rockaway Beach
Teenage Lobotomy
Blitzkrieg Bop
I Wanna Be Well
Glad To See You Go
Gimme Gimme Shock Treatment
Youre Gonna Kill That Girl

Side C:
Listen To My Heart
California Sun
I Dont Wanna Walk Around With You
Pinhead
Do You Wanna Dance
Chainsaw
Today Your Love, Tomorrow The World

Side D:
I Wanna Be A Good Boy
Judy Is A Punk
Suzy Is A Headbanger
Lets Dance
Oh Oh I Love Her So
Now I Wanna Sniff Some Glue
Were A Happy Family