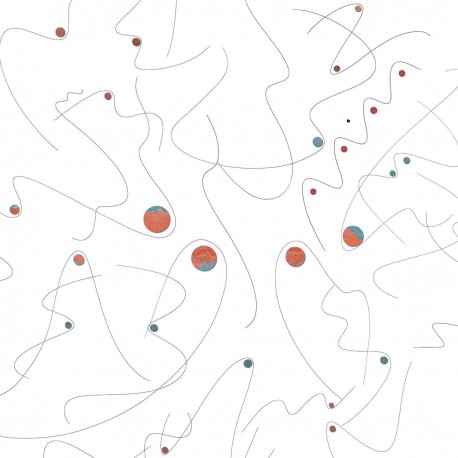 OOIOO is a name that should be familiar for anyone whose waded into rock and if their name isn't, YoshimiO, their leader's, should be. Percussionist and founding member for the Boredoms, & Saicobab, and a long time collaborator of Kim Gordon (of Sonic Youth), Susie Ibarra, & Robert Lowe among others. It's no surprise that each OOIOO record has been as energizing and enthralling as the last, which might be the most consistent thing about their 8 records that each focus on and offer listeners something new. Nijimusi was mainly recorded using a conventional rock ensemble of of two guitars, bass, and drums, but often feels more than that, the phrasing and rhythms becoming something new slowly and then all at once. It's rock, but can be hard to pin down exactly; psychedelic, shimmering distortion, shouts, and tight instrumentation giving way to a controlled burn of instrumental breakdowns. MISHINA's, added as the drummer in 2016, drumming shines. They use an improvisational process for recording, which leaves us with a record that feels so alive it's sometimes surprising it's still the same record every time you play it. Founded in 1995 OOIOO continue to wow. After 6 years without realeasing new music internationally they've created a new album that goes back to the roots of being a four-piece band. OOIOO's members came together as musicians who move freely between the audible and inaudible, rhythm and non-rhythm, noise and silence. Nijimusi can be considered music, but is also a work of art that stimulates the sense of touch and smell, while being atmospheric and ethereal at the same time. The work is a reflection of the sounds resonating from OOIOO while as they were completely present in the moment. The sounds are like the cries emanating from a creature called OOIOO, proof that it is a living, breathing being. Experience the sounds of OOIOO that can only be heard in the here and now.

Side C:
Walk For "345" Minutes, While Saying "Ah Yeah!" With A "Mountain Book" In One Hand, Until A Shower Of Light Pours Down