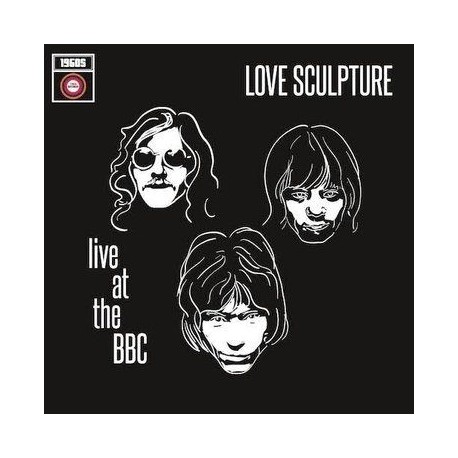 "We recorded Sabre Dance, all six minutes of it. Dave Edmunds always said that the first BBC version was the best recording" - Top Gear Producer Bernie Andrews. Love Sculpture guitarist Dave Edmunds would later tell Sounds magazine "we did a live session for John Peel's Top Gear and suddenly we were signed up by EMI, Gordon Mills was managing us and we had a number two hit single." This record shows that Love Sculpture were much more than a one-hit wonder, showcasing fourteen tracks recorded for the BBC by Edmunds, bass player John Williams and drummer Bob 'Congo' Jones. Included here are the harmony-pop of debut single River To Another Day, a toughened-up version of the Honeybus classic (Do I Figure) In Your Life and a spirited take on Chuck Berry's Sweet Little Rock & Roller. Love Sculpture's attempt to repeat a winning formula saw them sprinting through Bizet's Farandole at their third Top Gear session which also generated a rocking cover of George Harrison's The Inner Light, inexplicably omitted from either of Love Sculpture's studio LPs.

Side B:
Sabre Dance '68
(Do I Figure In) Your Life
River To Another Day
Don't Answer The Door
Sweet Little Rock & Roller
Great Balls Of Fire
Evening