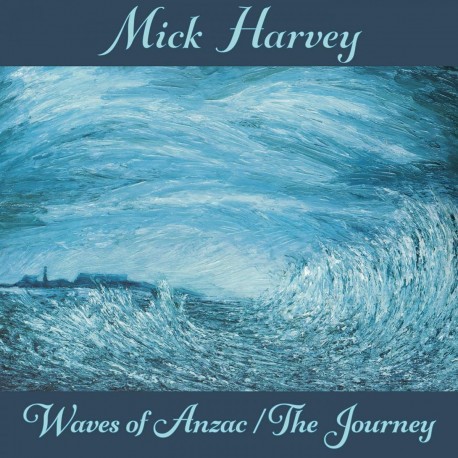 The album features two recent soundtracks to films with powerful subject matters. The first, Waves of ANZAC looks at Sam Neill's personal family history interwoven with the history of the First World War and the ANZACs through to the modern era while the second, The Journey, is a four-part composition released in support of #KidsOffNauru, a campaign working for the child refugees and people seeking asylum who find themselves in offshore detention.


Waves of ANZAC is represented by 13 tracks selected from the score for the ABC documentary on forgotten war stories and lives lost. The documentary is a personal history by the actor Sam Neill (Jurassic Park, The Piano) set against a contemporary increasingly divided political backdrop. 'Why ANZAC? with Sam Neill' (Dir. Kriv Stenders, 2015) is named for the Australian and New Zealand Army Corps (ANZAC) who served together in the Gallipoli Campaign, their first engagement in World War I and continued as a military unit until after WW2. The film is a look at this pivotal point in our shared history, and the impact it still has on a personal and on a geopolitical level. Harvey recently examined this period via the prism of a fictional soldier/poet for his collaboration with Christopher Richard Barker, The Fall and Rise of Edgar Bourchier and the Horrors of War.


The Journey is a four-part composition, recorded with The Letter String Quartet, in support of people seeking asylum who have found themselves in Australia's offshore detention program. The piece was composed as a study of the hardships endured by the detainees on Nauru, Manus Island and Christmas Island before and during their internment and as an expression of hope for a humane outcome to their plight.


Waves of ANZAC / The Journey was composed, arranged and produced by Mick Harvey and mastered by Loki Lockwood at Creepy Hollow. Full list of players below.


Mick Harvey is a founding member of The Birthday Party, Crime and the City Solution and The Bad Seeds and has collaborated extensively with PJ Harvey, Rowland S Howard and Anita Lane. His solo releases began in 1995 with the first in a series of Serge Gainsbourg interpretations and translations which he recently revived with two acclaimed releases in 2016 and 2017. Harvey has been scoring film and television since 1988's 'Ghostsâ€¦ of the Civil Dead' (Dir. John Hillcoat) and a collection of his soundtrack work - featuring music from 'Chopper' (Dir. Andrew Dominik, 2000), the award-winning soundtracks for 'Australian Rules' (Dir. Paul Goldman, 2002) and 'Suburban Mayhem' (Dir. Paul Goldman, 2006) and more - was released by Mute in 2006.

Side A:
- Waves Of Anzac
Turkish Theme
Waves Of Anzac
First Anniversary
The Somme
Archives
Poppies
The Lovells
The Cemetery
Modern War
Vietnam

Side B:
Crete
Back At Kiatora
The Arch
Return To Anzac Cover
- The Journey - With The Letter String Quartet
Part 1: Conflict
Part 2: All At Sea
Part 3: Capture (Not Real Refugees)
Part 4: Hope