> Vinyl>Sleaford Mods - All That Glue 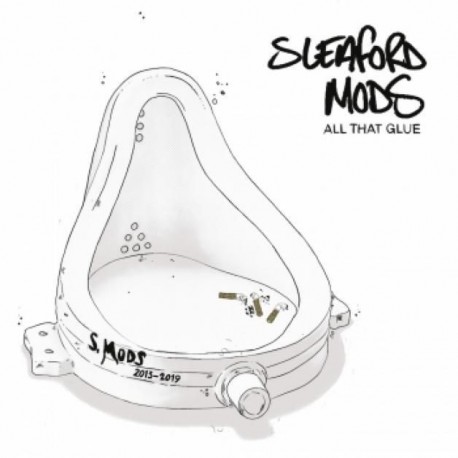 Sleaford Mods - All That Glue

All That Glue is a Sleaford Mods retrospective: 22 tracks of bangers (including Job Seeker, Tied Up In Nottz & Tweet Tweet Tweet), rarities & unreleased tunes. 'Job Seeker' was originally available as a limited edition 7" & it hasn't been available to stream for some time.

As one of the most important, politically charged and thought-provoking bands in music today, Sleaford Mods have been running crass but clever commentary on The People's discontent, combining the revolutionary fury of punk and hip-hop with the bleakness of austerity-era Britain, their five critically acclaimed albums a pre-Boris crystal ball of impending doom.

On paper it shouldn't work. Andrew Fearn's clever minimalistic beats, post-punk bass, intentionally cheap sounding keyboard riffs and wafts of guitar underpin lyricist Jason Williamson as he rants against stagnation, injustice and pop culture with outrage and scathing humour, capturing the spirit of their time with a blunt eloquence.

Hands up who thinks Sleaford Mods are the best band in the world. The rest of you are wrong. | Steve Albini