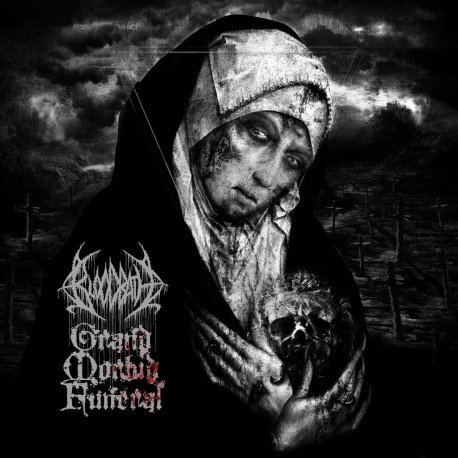 THE FOURTH STUDIO ALBUM OF SUPREME DEATH METAL FROM SWEDEN'S MASTERS OF HORROR, BLOODBATH. Bloodbath is a titan of death metal from Stockholm, Sweden, notable for the inclusion of Katatonia, Opeth and Paradise Lost members. Formed in 1998 with a mutual fascination for horror & the glory days of death metal (especially the old Florida & Stockholm 'Sunlight' scenes), the band has remained a leading light of extreme metal since their 'Breeding Death' EP was unleashed back in 2000, and a formidable force for 20 years, further cemented by the malevolent torrent of blasphemy on their 2019 studio album 'The Arrow of Satan is Drawn'. Recorded at Ghost Ward Studios and the City of Glass Studios in Stockholm, and mixed by David Castillo, 'Grand Morbid Funeral', Bloodbath's fourth full-length studio release, was undoubtedly the band's darkest and dirtiest opus; an organic collection of filth-ridden tracks straight from the grave, boldly eschewing the approach of somewhat over-produced modern death metal in favour of something altogether more rotten to the bone. With doom-like melodies mixed with raw and savage riffing and featuring several guest appearances including Chris Reifert and Eric Cutler from US gore-masters Autopsy, 'Grand Morbid Funeral' marked a new high-point of brutality for Bloodbath. Blakkheim (guitars): "We're proud of all these different styled releases and we loved doing each & every one of them, but the objective was never to settle with a certain style, so the time has come to shift once more. It was already decided right after the last album that the next record would not be a "Fathomless part 2", but it would become its antithesis! So, prepare yourselves for an ultimate blueprint of low-fi, raw, heavy, organic and sludgy death metal sound! The time has come to stomp those HM-2 pedals once more and close the circle of the death metal archives with our Grand Morbid Funeral" This edition of 'Grand Morbid Funeral' is presented on 180gm heavyweight gatefold black vinyl in single sleeve packaging complete with a printed inner bag featuring lyrics.

Side A:
Let The Stillborn Come To Me
Total Death Exhumed
Anne
Church Of Vastitas
Famine Of God's Word
Mental Abortion

Side B:
Beyond Cremation
His Infernal Necropsy
Unite In Pain
My Torturer
Grand Morbid Funeral