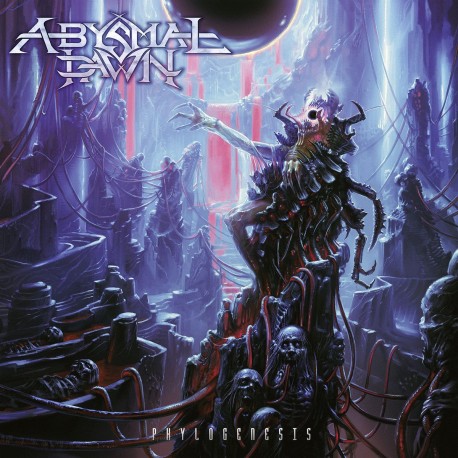 vinyl editions come in gatefold sleeve with double-sided insert. Transparent red vinyl edition is strictly limited to 400 copies worldwide. American death metal masters ABYSMAL DAWN are back! After a six-year gap, the Los Angeles-based outfit and Season of Mist hereby present 'Phylogenesis'. From the darkest depths, they prevailed, heralding a new chapter in the group's storied history. Conceptually, 'Phylogenesis' deals with the breakdown of social constructs humans have built over time. The album title is defined by the evolution (or diversification) of a species. So, 'Phylogenesis' is an ironic take on guitarist / vocalist Charles Elliott's observations, particularly how social media has accelerated and exacerbated the de-evolution of humanity's interactive abilities. Recommended if you like: HATE ETERNAL, SUFFOCATION, NECROPHAGIST

Side A:
Mundane Existence
The Path Of The Totalitarian
Hedonistic
A Speck In The Fabric Of Eternity

Side B:
Coerced Evolution
True To The Blind
Soul-Sick Nation
The Lament Configuration