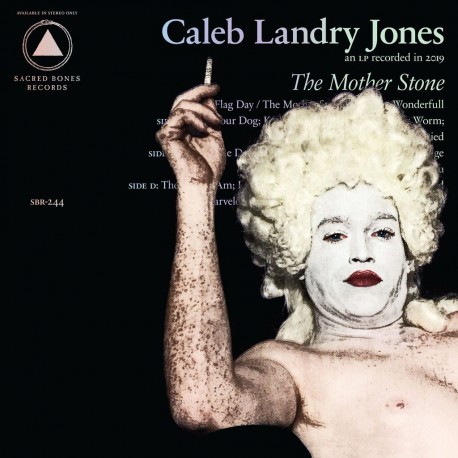 "I think most of it takes place in dreams," Caleb Landry Jones says of his debut solo album, The Mother Stone. "I'm talking more about dreams than I am about what's happened in the physical realm. Or I'm talking about both, and you're not sure what's what." Caleb Landry Jones was born in Garland, Texas in 1989 and comes from a long line of fiddle players. Three, maybe four generations back, on his mother's side. His grandfather wrote jingles for commercials, his mother was a singer-songwriter who taught piano lessons in the house, and his father was a contractor who did a lot of work for the Dallas music-equipment retailer Brook Mays and knew a guy if you needed a bass or a banjo. But Jones is not sure if you can hear any of this in his music and he does not play the fiddle. Jones has been writing and recording music since age 16, around the same time he started acting professionally. Played in a band called Robert Jones for a minute, lost his guitar player to higher education, moved into his own place, and broke up with somebody, at which point the songs really started coming hard and fast. "I started playing guitar and playing more keys," he says, "and then started writing record after record after record after record, because I didn't know what to do with myself. It was a good way of healing. And it felt like as soon as I started doing it, it felt like it needed to happen all the time." In the ensuing years he'd spend a lot of time carrying unrecorded songs around in his head like goldfish in a bag, waiting for a chance to record them in marathon sessions in his parents' barn. "You gotta play the songs every day, or every two or three days, to keep 'em," he says. "Otherwise I forget them." Sometimes the ideas fuse together, one chapter to the next; this is how songs grow into sevenplus-minute epics like the ones on The Mother Stone. His back catalog is around seven hundred songs deep- a whole discography of full albums, most of them unheard outside the barn, at least for now.

Side A:
Flag Day/The Mother Stone
You're So Wonderful

Side B:
Dig Your Dog
Katya
All I Am in You/The Big Worm
No Where's Where Nothing's Died

Side C:
Licking the Days
For the Longest Time
The Hodge-Podge Porridge Poke
I Want to Love You

Side D:
The Great I Am
Lullabbey
No Where's Where Nothing's Died (A Marvelous Pain)
Thanks for Staying
Little Planet Pig