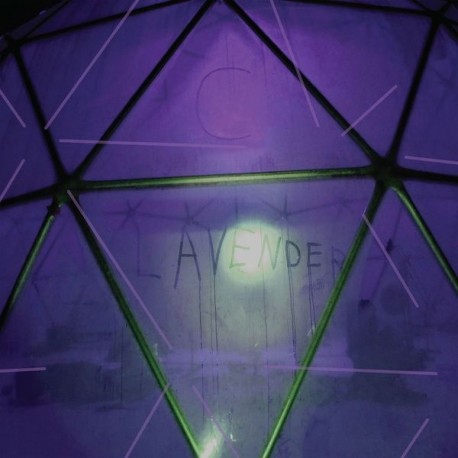 C. Lavender is a New York based sound artist and sound healing practitioner whose third full-length album explores meditative physical rituals of sound with binaural recordings from inside a geodesic dome in the Catskill Mountains of New York. "The future is a choice between utopia and oblivion," noted architect, futurist and geodesic dome theorist Buckminster Fuller. Myth of Equilibrium delves into these divergent paths by featuring equal parts of pastoral raw acoustic percussion combined with C. Lavender's signature "devastating caustic drones" (Ad Hoc) via her custom bass guitar and synthesizers. An assistant to the late pioneering electronic composer and Deep Listening founder Pauline Oliveros, C. Lavender's astute editing and the binaural recording process places the listener within the heady fluctuating underworld she has created on this album. The recording environment of the geodesic dome allowed for sounds to transfer out beyond the confines of the walls as well as allowing outside sounds from the surrounding wilderness to permeate in like that of a mutating cell. The album suggests "headphone listening" for the full hypnotic experience Myth of Equilibrium presents to the listener. C. Lavender is a 2020 Pioneer Works (New York) Music Artist-in-Residence.

Side B:
Engulf The Mystery
Embrace The Call
Dimly Lit Exit
Expel The Atrophy