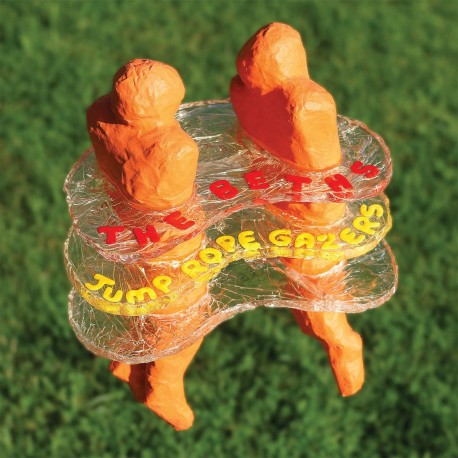 Includes unlimited streaming of Jump Rope Gazers via the free Bandcamp app, plus high-quality download in MP3, FLAC and more.
ships out within 3 days
Buy Record/Vinyl $15.99 USD or more
Send as Gift

Digital Album
Streaming + Download
Includes unlimited streaming via the free Bandcamp app, plus high-quality download in MP3, FLAC and more.
Buy Digital Album $9.99 USD or more
Send as Gift
1.
I'm Not Getting Excited 02:42
2.
Dying to Believe 03:34
3.
Jump Rope Gazers 05:12
4.
Acrid 04:06
5.
Do You Want Me Now 04:16
6.
Out of Sight 03:39
7.
Don't Go Away 04:10
8.
Mars, the God of War 02:53
9.
You Are a Beam of Light 03:50
10.
Just Shy of Sure 04:24
about
Everything changed for The Beths when they released their debut album, Future Me Hates Me, in 2018. The indie rock band had long been nurtured within Auckland, New Zealand's tight-knit music scene, working full-time during the day and playing music with friends after hours. Full of uptempo pop rock songs with bright, indelible hooks, the LP garnered them critical acclaim from outlets like Pitchfork and Rolling Stone, and they set out for their first string of shows overseas. They quit their jobs, said goodbye to their hometown, and devoted themselves entirely to performing across North America and Europe. They found themselves playing to crowds of devoted fans and opening for acts like Pixies and Death Cab for Cutie. Almost instantly, The Beths turned from a passion project into a full-time career in music.

Songwriter and lead vocalist Elizabeth Stokes worked on what would become The Beths' second LP, Jump Rope Gazers, in between these intense periods of touring. Like the group's earlier music, the album tackles themes of anxiety and self-doubt with effervescent power pop choruses and rousing backup vocals, zeroing in on the communality and catharsis that can come from sharing stressful situations with some of your best friends. Stokes's writing on Jump Rope Gazers grapples with the uneasy proposition of leaving everything and everyone you know behind on another continent, chasing your dreams while struggling to stay close with loved ones back home.

With songs like the rambunctious "Dying To Believe" and the tender, shoegazey "Out of Sight," The Beths reckon with the distance that life necessarily drives between people over time. People who love each other inevitably fail each other. "I'm sorry for the way that I can't hold conversations/They're such a fragile thing to try to support the weight of," Stokes sings on "Dying to Believe." The best way to repair that failure, in The Beths' view, is with abundant and unconditional love, no matter how far it has to travel. On "Out of Sight," she pledges devotion to a dearly missed friend: "If your world collapses/I'll be down in the rubble/I'd build you another," she sings.

"It was a rough year in general, and I found myself saying the words, 'wish you were here, wish I was there,' over and over again," she says of the time period in which the album was written. Touring far from home, The Beths committed themselves to taking care of each other as they were trying at the same time to take care of friends living thousands of miles away. They encouraged each other to communicate whenever things got hard, and to pay forward acts of kindness whenever they could. That care and attention shines through on Jump Rope Gazers, where the quartet sounds more locked in than ever. Their most emotive and heartfelt work to date, Jump Rope Gazers stares down all the hard parts of living in communion with other people, even at a distance, while celebrating the ferocious joy that makes it all worth it--a sentiment we need now more than ever.

Side A:
I'm Not Getting Excited
Dying To Believe
Jump Rope Gazers
Acrid
Do You Want Me Now

Side B:
Out Of Sight
Don't Go Away
Mars, The God Of War
You Are A Beam Of Light
Just Shy Of Sure

Side D:
Out Of Sight (Demo)