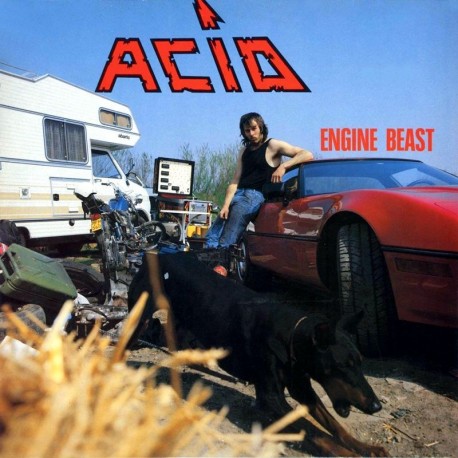 Engine Beast (ltd. electric blue Vinyl+Bonus 7. When Acid put out their third and final record in 1985, internal tensions had already started to destabilize the line-up, yet this did not mean that "Engine Beast" was a half-baked affair. If anything, it is the thrash pioneers' most refined and, if one daresay so, "polished" effort, the main reason probably being the mix by renowned Dutch sound engineer Erwin Musper, who would later work on stadium rock successes such as Def Leppard's "Hysteria" or Scorpion's "Crazy World." Nevertheless, skinsman Geert "Anvill" Ricquier and vocalist Kate de Lombaert, forever the group's core duo, alternately sounded like a feminine Accept at their beefiest and many of the thrash acts they not only preceded but also significantly inspired.

Side B:
Warriors Of The Dark
Let Me Die
She Loves You
Engine Beast
Satan's Delivery