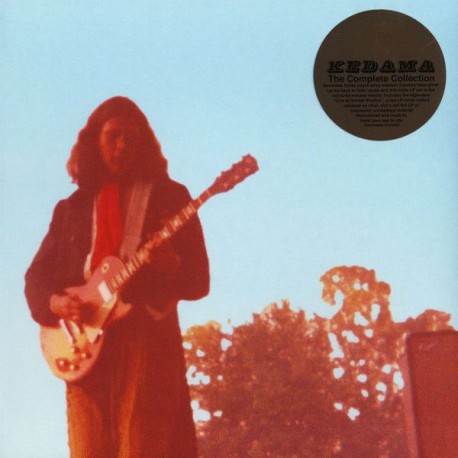 "Three thick LPs of hot jellied kraut-prog heavies coming at you from 1970s Swiss-German based Kedama: three LPs of 'live' in-the-studio and actual live recordings-unbelievably telekinetic drums, keys and guitar. Vision quest soundscapes, a total gem lost to the ages here, y'all. The first LP was reissued by Geurrson Records a while back, the other two LPs are unreleased on wax as of yet: rarities and live oddities. It's been a real pleasure to work with these guys, as they were as excited as we were and provided us with a plethora of recordings and photos and press clippings to sort through, to pull together this nice little set. "It's raw, like you like it after a few. It's heavy, so you can nod as you sway along the path. It's beautiful, so you can reminisce. It's winding, so your imagination is blindfolded. It's far-flung space jams so you can fry out. It's screwed-down genius so you can be inspired. This shit is far out and a real-deal old school fuse lighter and its limited to 1000 copies. Nice, never seen before photos of the gurus, so come and get it nerds! "For fans of Le Orme, Yes, Birth Control, Camel, Edgar Froese, ELP, King Crimson." -John Dwyer

Live At Sunrise Studios
Side A:
Overture
Finale

Side B:
Our Power
Zugabe

Side D:
Intermezzo
Two Souls In Space
Feelings Without Name

Side F:
Generator Part Of Water
Take It Easy
Our Power
The Fool